A film synopsis is typically a one-page document that summarizes your film. It contains the film’s title, genre, logline (a one-sentence summary), and a five-paragraph explanation of the film’s storyline, major plot points, and key characters.

Why you should write a synopsis

A screenplay synopsis is a vital tool in the filmmaking world, helping you sell your movie idea to agents, managers, producers, and studio execs. Before anyone commits to reading your full screenplay, they’ll want to check out a one-page synopsis. So it’s super important that you get it right.

The likes of screenwriting maestro Aaron Sorkin probably won’t have any trouble getting someone to read their script without a synopsis. But if you’re not in Sorkin’s league, you’ll probably spend a bunch of time emailing query letters to try to grab people’s attention. To do that, you’ll need to include a short synopsis that sells.

The difference between a film synopsis, logline, and treatment

It’s easy to confuse a synopsis with a logline or film treatment. But while they’re similar terms, there are a few important differences. 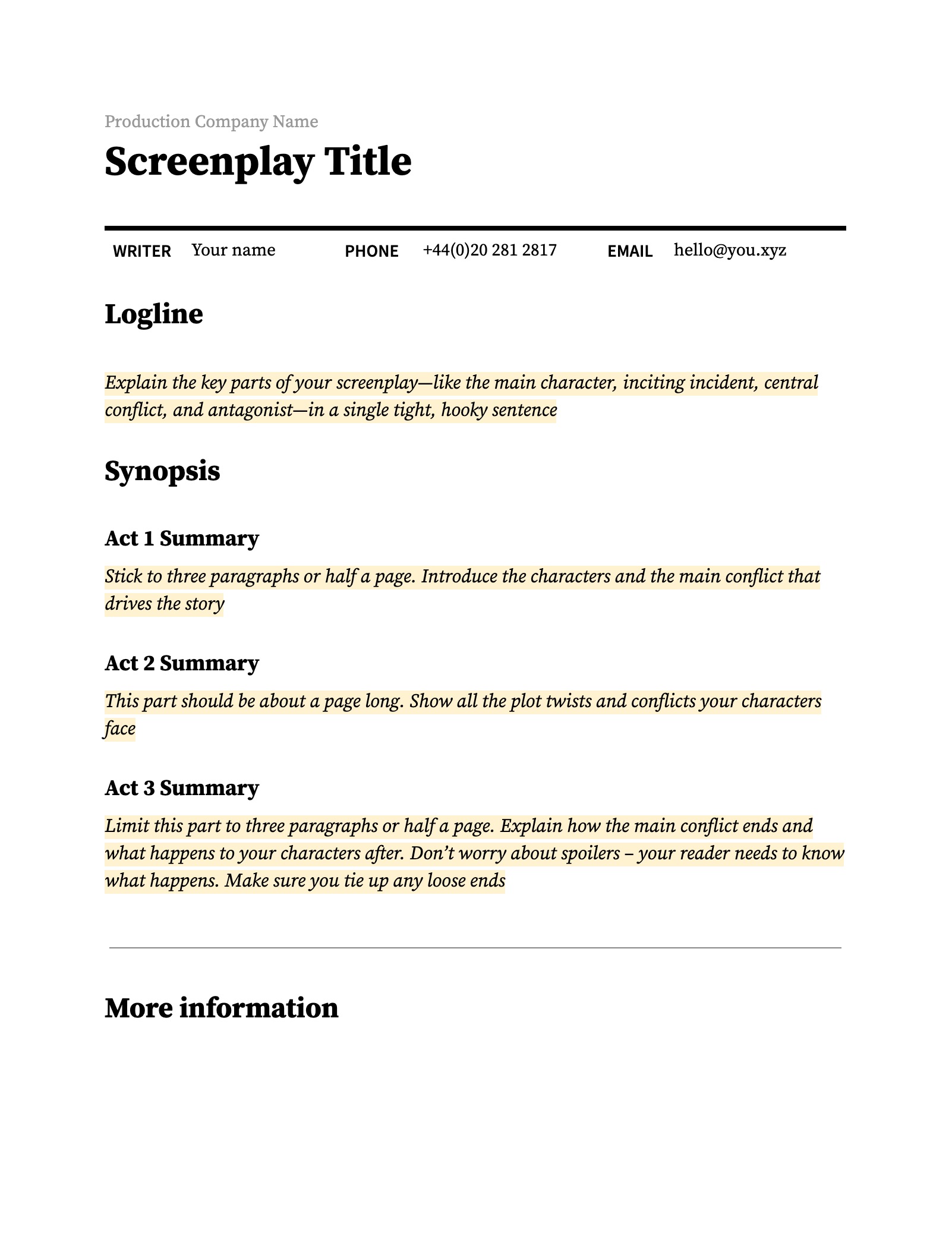 How to format your synopsis

Before you dive in and start writing your script synopsis, make sure you get to know the basic formatting principles.

At the top of the synopsis, write your script's title and state that it’s a synopsis. Under the title, let the reader know what genre your synopsis is. If your film’s Rocky, for example, you’d write: ‘A rags to riches sports drama’.

Underneath the header, add your name, address, email address, and phone number. This is super important, especially if the person reading your synopsis receives it from someone else and doesn’t have your details. If you have a Writers Guild of America (WGA) registration number, add that, too.

Next, add your logline before the first paragraph. This gives your reader a taster of the storyline. A logline is typically two sentences that identify the main character, the challenge they’re trying to overcome, and why they need to overcome it. You might also want to follow the logline with a paragraph that explains why your screenplay is appealing for filmmakers.

Much like a good pasta sauce, you only need a few ingredients for a tasty logline. Four, to be precise:

Once you've got those four ingredients, you can put them together in different ways. Like this, for example:

When inciting incident happens, the main character decides to do central conflict against antagonist.

Most screenwriters advise writing loglines that are only one sentence long. Some people say no longer than 30 words. But if your movie is on the complicated side, you might need to stretch your logline to a couple of sentences.

Check out our helpful guide: How to write a logline

4. Introduce the main characters and setting

Keep this part to one paragraph, max. It should include:

Type the characters’ names in capital letters (e.g. ROCKY) when they first appear. After that, type them normally (e.g. Rocky).

Make sure your synopsis includes the protagonist, antagonist, love interest, and any important allies of the protagonist. You don’t need to include the names of smaller characters.

Stick to three paragraphs or half a page. Introduce the characters and the main conflict that drives the story.

The first act is where you set the stage at the beginning of the story. It shows the viewer who your main character is, what their life's like, and what they care about. Importantly, you want to communicate some of the challenges that your character is facing. Obviously, your character wants to overcome these challenges, which has a big impact on how the story progresses.

Then, you'll need a catalyst or ‘inciting incident’ – something spicy that happens to get the story started. This will spark a series of events that sets the protagonist on an epic journey of character development. It inspires their character arc and helps them reach their goals.

This part should be about a page long. Show all the plot twists and conflicts your characters face.

The second act is where your story starts hotting up, as your intrepid protagonist sets out to achieve their goal. It's the point of no return. It’s also where your character starts hitting roadblocks as they get to know their new situation, and see the many challenges ahead of them.

This is a good time to flesh out the rest of the characters in the story, both friends and enemies, as well as the protagonist. You’ll also want to expand on the story’s central conflict, whether it’s a person or a thing.

Limit this part to three paragraphs or half a page. Explain how the main conflict ends and what happens to your characters after. Don’t worry about spoilers – your reader needs to know what happens. Make sure you tie up any loose ends.

The third act is where your narrative arc culminates, the story comes together, and we see the final clash between our protagonist and antagonist. Often, this is the point where we get to witness the true strength of the antagonist – after not seeing much of them in the film – which can surprise the protagonist.

Your viewers are probably aware that the main character will win in the end – after all, that’s how stories usually go. But it’s much more exciting if you keep them on tenterhooks for as long as possible.

Learn how to structure your story with our guide: Find Your Perfect Story Structure in Three Acts

Your synopsis should be roughly two to three pages long. A one-page synopsis is likely to not have enough detail, but anything over three pages is too bulky. Your reader should be able to finish reading your synopsis in a few minutes, and have a good idea of whether it’s right for them.

Write in the present tense

Use the third person

Always write from a third person perspective, using pronouns like ‘he,’ ‘she,’ and ‘they.’

Get your spacing and paragraphs right

Use single spacing. Keep each paragraph single spaced. Place an extra space between individual paragraphs. When you start a new paragraph, don’t indent.

Use a simple font

While you might love Comic Sans, your reader probably won’t. Stick to a simple font like Times New Roman or Arial, in font size 12 – unless submission guidelines ask for something different.

Stick to the main plot points and main characters

You don’t have a lot of space to play with, so skip the subplots and secondary characters. If it’s not essential to your script's A-story, cut it.

Write in the style of the movie's genre

If it’s a comedy movie synopsis, it should be funny. If it’s an action synopsis, make it exciting and energetic. Whatever the genre, the narrative should constantly be moving forwards. Each beat in your synopsis should cause the next beat or be the effect of the previous beat.

In your quest to hit all the plot points, don’t forget to call out your character arcs. Your protagonist’s motivations, and emotional turning points, need to be clear. Make sure each main character has at least one distinctive characteristic that helps them stand out from the other characters.

Now’s not the time to show off your creative writing chops. If a Hollywood exec’s going to jump on board, they need to understand the plot. Avoid superfluous adjectives and adverbs, and stick to simple, succinct, clear language.

Send your synopsis to friends and family, and ask them to spot any sneaky spelling or grammar mistakes. They can also let you know if any parts of the synopsis aren’t clear to them. Keep refining and editing your synopsis until it’s error-free and flawlessly clear to anyone who reads it.

When submitting your synopsis to different places, they may well have specific guidelines. Make sure you make any changes necessary to follow those guidelines. Agents, movie studios, and other readers may also ask for changes to fit established word counts or page counts.

Free Film Synopsis Template
A Google Docs template with space for title, genre, logline (a one-sentence summary), and a five-paragraph explanation of the film’s storyline, major plot points, and key characters.
Read Next
The 5 Key Story Elements
A lot goes into writing a banger of a story. That’s why the writing process takes so long. But when you boil it down, each story is actually made up of five basic story elements.
How to Write a Logline
Before you start work on your Hollywood-busting screenplay, you'll need a logline. It's a one-sentence summary of your movie that entices someone to read the entire script.
How to Write Your First Short Film: Step-by-Step Guide for 2021
Short films win Oscars, launch careers, and delight audiences with tasty, bite-sized stories. In this post, we’ll show you how to write your own.