The Greeks are good at a lot of stuff. Weddings. Smashing plates. Growing (and marinating) olives. But, unbeknownst to many, they also have a rich history in advertising.

Before there was Ogilvy, there was Aristotle. The Greek philosopher cooked up a concept called the three ‘modes of persuasion’ that would have gone down an absolute storm on LinkedIn.

In short, it’s a framework for understanding the three main ways we persuade people to do something. Here's the line-up:

Ethos is the Greek word for ‘character’. It’s where we get the word ‘ethic’ from. Brands use ethos by working with a celebrity or expert – someone who the audience will see as being credible or trustworthy. They hope that by working with a household name, some of the celeb's magic dust will fall on the product they’re advertising.

Colin Kaepernick is an American football player who oozes good ethics. He bravely protested against racial injustice and systematic oppression in the USA by kneeling during the US national anthem, rather than standing. It resulted in him not having a team to play for (and a barrage of angry Trump tweets).

Kaepernick sacrificed everything. So when he says the line, “Believe in something, even if it means sacrificing everything,” it's a powerful use of ethos. It leaves the audience thinking that if it trusts the character of the speaker (Kaepernick), then it can trust Nike as a credible source, too. 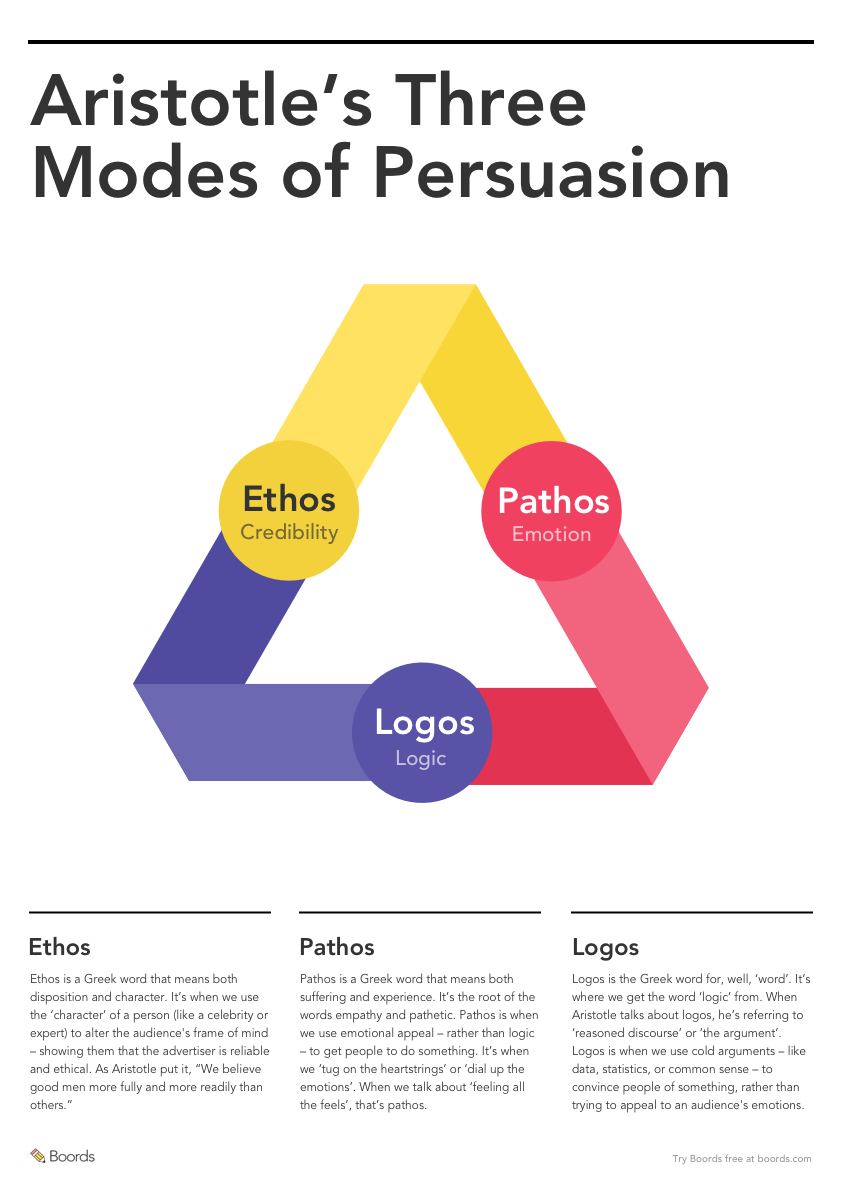 Pathos is the Greek word for ‘suffering’ and ‘experience’. It’s the root of the words ‘empathy’ and ‘pathetic’. Advertisers use pathos by making an audience feel what they want them to feel, whether it’s humour, anger, pity, or any other emotion. You might call it ‘tugging on the heartstrings’ or ‘dialing up the emotions’.

Gillette’s new ad is a prime example of pathos. If you wanted an advert to sum up 'all the feels', this would be it. On the surface, it’s just a clip of a dad teaching his son how to shave for the first time. But the kicker is that his son is transgender activist Samson Bonkeabantu Brown.

So when Samson's dad tells Samson not to be scared, it goes much deeper than fearing a little shaving cut. This is about more than razor technique. It’s about the challenge of living as a trans man, too. And Gillette's use of pathos swoops in to give your heartstrings a big tug.

Logos is the Greek word for, um, ‘word’. But it's also where we get the word 'logic’. Advertisers use logos by convincing an audience of their argument using facts, logic or reason. Logos is when we use cold arguments – like data, statistics, or common sense – to convince people of something, rather than trying to appeal to an audience's emotions.

When it launched, the iPhone X was one of the ritziest, most expensive phones available. That may be why Apple kept it simple with this ad, rattling off a list of compelling facts and figures about its latest creation – like wireless charging, durable glass, and a lack of home button. The result? A perfect example of logos, and an ad that's teeming with logical appeal.

Apple has one agenda with this spot: to deliver logical arguments that the iPhone X is the most advanced phone on the market, and put you in a frame of mind where you’ve simply got to have it – regardless of its hefty price tag. With a mix of hard data and facts, Apple positions the iPhone X as the logical choice for the discerning gadget lover. Aristotle would be proud.

Imagine if there was an advert that combined ethos appeals, pathos appeals, and logos appeals. Would it break the internet? Is it even possible? To experience this dynamic ethos-pathos-logos trifecta, we need to jump all the way back to 1996 and talk to a guy called George.

We might be wrong, but we think this could be one of the best adverts of all time. Or, at least, Aristotle's favourite. It's got the celebrity appeal of former boxer George Foreman – a man we can all agree is worth listening to. It elicits an emotional response by making you laugh (or at least chuckle lightly). And it's full of persuasive appeals about the many, many merits of George's grill. Check, check, check.

Hitting up all three means of persuasion might not be the only reason George has managed to sell over 100 million of his grills. But we're willing to bet it helped. Who knows what might happen if, like George, you mastered Aristotle's rhetorical appeals? The sky's the limit.