Scene templates are a vital tool for novel writing and filmmaking alike. They’ll help you with all the aspects of world-building that make for a compelling story, encouraging you to think about backstory, character arcs and story structure. The end result? A story that your audience will love.

In this guide, we’ll give you a free outline template workbook that’ll help you nail your scene templates and create a killer synopsis. It’s a great tool, whether you’re a pro filmmaker or writing your very first novel.

What is a scene template?

A scene template is a short worksheet where you can brainstorm the details of each scene – like the time of day, weather, and point of view (POV) – as well as answering questions that help to clarify the purpose of your scene – like how the scene advances the story, and what conflicts and obstacles they face.

While we’ll offer some rules to follow, there’s no ‘one size fits all’ template for a perfect scene. The kind of novel or film you’re writing will impact the style, length, and structure of a scene, so it’s important to study examples in your genre – whether it’s an arty short story, or a Fast & Furious-style action film.

In filmmaking, storyboarding is a huge part of the outlining process. Some people create a storyboard by pinning note cards to a corkboard. Others use Google Docs or an online tool.

For some writing tips that’ll take your storyboarding to the next level, check out the how to storyboard guide on Boords. 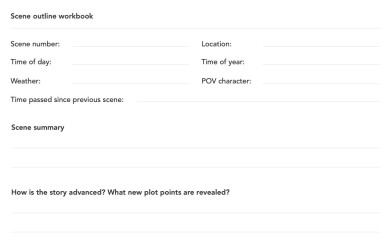 Scene Template
Get our scene template (as a free download) to structure your scenes.

When it comes to writing, some people say there are two types of people: plotters and pantsers.

Pantsers fly by the seat of their pants when cooking up their story structure. They get the smallest idea and dive right into a novel outline with no idea where they'll end up. They throw in subplots at will, see where the storyline takes them, and sometimes – by a pure miracle! – finish with a complete book.

Plotters, on the other hand, plot. They map out the entire story structure before writing the first word. Plotters know exactly where the storyline's going and treat creative writing like the complex art that it is. 'Fail to plan, plan to fail' is every plotter's favourite mantra.

Spoiler alert: we're plotters. And here's a cheeky writing tip from your pals at Boords: you should be a plotter, too.

Define how many scenes are in your story

Before you start throwing your scene ideas into a scene template, you need to step back, take a look at the big picture, and figure out how many scenes there’ll be in your finished story. At this stage, you can only make an educated guess – you’ll need to make changes once you’ve completed your first draft of the story.

The average film script has 110 scenes – just over one scene per page. Action scripts tend to have slightly more scenes, with comedies usually having fewer.

The average number of scenes in a novel depends on your genre, target word count, and whether you tend to write short or long scenes. For a 100,000-word novel with scenes of 2,500 words, you’ll have about 40 scenes.

Once you’ve calculated an approximate number of scenes, divide this number up for the different parts of your story. This will be determined by your story structure.

In filmmaking, most people follow a simple three-act structure:

Once you’ve got a rough idea of how many scenes you’re writing, and divided them to suit your story structure, you can start calculating how best to include, combine, expand, and portray the events that need to happen in each section of your story. This includes the structural beats themselves.

Learn how to create the perfect story structure with our free guide: How to write a three-act structure

Create labels for each scene

Lots of writers swear by using a labelling system to organise their scenes. Later on in the process, when you’re writing your first draft, your labels will make it much easier to keep track of what’s going on and the purpose of each scene.

Create a label for each of these details in your scene:

You might also want to add images of costumes, settings and props for each scene so that you can keep all your inspiration in one place.

A scene should advance the plot, aid character development, or do both. That’s a good starting point but it’s a little woolly.

Your scene also needs strong pacing, it should create empathy for your main character, and it should show, not tell. A bit of mystery and conflict always goes a long way to keeping your audience hooked, too.

Summarise your scene with a single sentence that sums up what it’s about. This sentence serves as a guiding light for the entire scene. Every element of the scene has to serve that purpose.

Identifying the high moment of your scene is a vital step that reveals the ultimate purpose of your scene. Everything in the scene adds up to this moment.

Most of your scenes will follow a typical story structure, with a beginning, middle, climax, and ending. Your high moment will usually happen at the end of a scene, maybe even in the last line. Your scene can also ‘hang’ at the end, adding tension and propelling the reader into the next scene.

The best films and novels have conflict on every page – whether inner, outer, or both. The important thing is to make sure that conflict is purposeful, always advancing the plot or exposing an interesting part of someone’s character.

Think about how your point of view (POV) character feels before a scene starts, and how they feel when it ends. Your character should be changed by what happens, whether it’s a small change of opinion or a huge personality shift.

These changes help to push your characters on to major plot points, forcing them to make decisions and take action. That said, every event should be significant and serve your overall plot.

Consider which character is best placed to communicate the scene to your audience. It might well be your main character’s POV, but you may also want to consider if a secondary character could be better for the scene. This will depend on the purpose of your scene.

Here are some good questions to consider when deciding on POV:

If you start your scene slap bang in the middle of the action, just before you build to the high moment, you’ll avoid pages of narrative that don’t matter.

While it’s a good idea to incorporate some backstory, don’t do it at the expense of the present action. Cut anything that doesn’t serve the scene. Make sure every word counts.

We all know that the first line of a novel needs to grab your reader. But the same goes for every scene, too. Your scenes need to open in a way that sucks your audience in, promising them entertainment.

Apply the same logic to your scene endings, too. The final paragraph or lines of dialogue should dial up the conflict and emphasise the character transformation that’s happened in the scene.

Adding sensory details, like details about lighting, sound and smell, can help to bring your scene to life. These details might seem insignificant but they go a long way to igniting your audience’s senses.

Try to give your audience as rich a picture of the scene as possible. Stick to important details that aid the scene, without getting bogged down in information that doesn’t matter.

Want to create the perfect story? Check out our handy guide full of foolproof tips: How to tell a story

Using a scene template helps you to get all of your thinking on the page. The next step is working through your writing to see what’s good, what’s got merit, and what needs to go.

You can use a simple colour-coding system to mark up your scene template, helping you see what’s there at a glance. For example:

You may also want to do this with a friend or collaborator for a second opinion. Teamwork makes the dream work!

Storyboarding software for filmmakers, novelists and more. Get organized and produce your best work.
Try Boords Free
Read Next
How to Write a Documentary Script: Expert Storytelling Tips
If you’re a filmmaker that wants to take the documentary world by storm, you’ll be needing a documentary script. In this post, we’ll share a wealth of tips to get you started.
How to Write Your Documentary Treatment
If you’re a filmmaker looking to get support for your documentary project, you’ll need to create a documentary treatment.
How to Write an Amazing Film Synopsis (Step-by-step Guide)
After you’ve finished writing your latest Hollywood smash and put your pen down (or shut your computer), you might think your work’s done. But there’s one thing left to do: write a film synopsis.